THE NOT SO DAILY DUMP is an idea that came along simultaneously with the name. For the record, it really isn't a reference to a daily bathroom habit, pooping. Me being me and you being you means we will giggle at this, because it is childishly funny. (But only briefly, because, if we giggle too long, it might get weird.) What the name actually refers to is a dumping of accumulated information. I could have replaced dump with download or some other trendy, slick word, but I went with dump. It IS funny. It DOES have a double meaning, even if unintended.

The "not so" part of the name is probably what you think it means. Will it be daily? Hell no. I've got no time for that. Will there be some kind of schedule it will be on? No to that as well, minus the hell. So why the name? What does it mean? I'm getting to that.

The concept behind this is as follows. Posts with this title and number (in a series) will consist of multiple mini-posts. Perhaps one of those mini-posts will turn into a bigger post later. Maybe, I just wanted to mention something and a paragraph or two or three was plenty. The best way to convey what one means is by showing, so I will try and show.

Will this concept be short-lived on this blog? Depends on your time scale, I guess. Most things are short-lived in comparison to the almost and quite possibly infinite life of the universe. However, it will outlast the lifespan of a mosquito. I've got that going for me. Mosquitoes are assholes.

Broken Down Tractors Are NOT Sexy 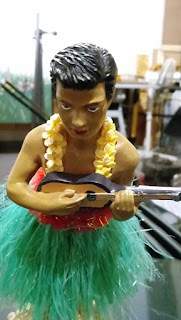 This year, not so long ago, I wrote a post about getting a used riding tractor. Just recently, last week, it died on me. As much as I or the next door neighbor tried, we couldn't figure out why. We couldn't get it to start, let alone 'turn over' much. My wife reached out to an uncle who lives close by and is experienced with engines. She also contacted the man we bought it from, John, since he, too, is experienced with engines. Also, we bought it from him, so maybe he knew about something we didn't.

Well, Uncle Bob got it sorted out Sunday afternoon, and it's running again. One of the valve push rods had come loose and the other push rod got bent due to the movement of the engine while it was running. He straightened it out, literally, and put it back together.

It's always good to be reminded that there are people in my life willing to help me out. I don't have an expertise in many things (maybe nothing), but both Uncle Bob and John and my neighbor were willing to check it out and at least give me information that I wouldn't have been able to manifest alone. I might have to show them my gratitude beyond a 'thank you' and a high-five.

One thing in particular that I wanted to accomplish with this feature, THE NOT SO DAILY DUMP, was to highlight other people I know. It could possibly come about that I run out of people to highlight. I'm not your average shmoozer shmoozing around parties and 'it' people. But, I do know people who are out in the world doing their best and trying to make their mark in their own way. I know a lot of awesome people, and I want to share them with you!

The first person I want to highlight is my wife, because well, she's my wife. I've mentioned it before, but she started running seriously about a year ago, and she decided to start documenting her running experience with a blog this year. She's talented in many ways, has always been as supportive of me and my craziness as she can be, but for this post, I'm recognizing her for the running stuff. It takes hard work, focus, dedication, and drive to accomplish great things.

Check out her blog, Running on Empty, at christinesedam.com.

I don't have a whole post's worth of words to comment on this HBO limited series, but I did want to bring it up here on THE NOT SO DAILY DUMP, because that's the point to this feature.

I had an idea about what the show was about before I started watching it with my wife. I'm not exactly sure, but I think that is what partly caused the odd feeling in my gut over the first few episodes—having an idea of what was coming in the first episode and then seeing how things can go totally wrong and spiral out of control.

I will happily admit that I'm glad the show was only eight (one hour) episodes. There are plenty of shows that I currently watch (and those I'd like to start) to keep me televisually satisfied for years. It's nice to watch a series you can get into with greater depth knowing that there won't be a cliff hanger or any unfinished business at the end. However, I would not consider the ending a happy or an unhappy one. Just numb emptiness, really.

You may be asking, "Why would I want to feel that way?" Because, art is life and life is art. You feel it, brah?

THE NOT SO DAILY DUMP

I stated in the post " Got Resolve? A New Year's Beginning " that I would be explaining the goals I outlined in more detail. If you want a little more background on my musing about goals, New Year's Resolutions, and the like, you can start with the post linked above. Or, you can start with a post I wrote in early 2017 entitled, " Not So New Resolutions For The New Year ." I'm going to try and keep this post more focused and answer nonexistent questions, to explain my rationale for setting the goals up the way I did. This post, no doubt, will still be plenty long. I've established some rules because having goals isn't enough, right? *Sarcasm* In this case, I felt rules were necessary to ultimately gain what I hope to get out of this project. It's more than saying, "I want to do this, and look, it's done." I'm not only trying to accomplish the particular item on the list, but also trying to change my brain and daily habit
Read more