THE NOT SO DAILY DUMP #8

"Has anyone in this family ever even seen a chicken?"

I've heard that this show will be coming back for another season. I'll be watching it, make no mistake, but I do have mixed feelings about it. The last season felt like a mixed bag for me, like it tried to do too much, too fast. I loved it, though, because it was still Arrested Development. I can only wonder what another season will bring. It seemed like the last season tried to finish the show off, perhaps unsuccessfully. Maybe that will be a part of the joke in it coming back.

Either way, enjoy the clip below. A classic shtick from the show. Emailers—clickety, clickety, go.

Last year, I wrote a whole post about my family's MEA adventures. Actually, the happenings of that week inspired three short posts. This year, it gets a spot in THE NOT SO DAILY DUMP. Did we do less? I don't think so. Do I have less to say about it? That's probably more accurate.

Side Note: Our school district gets the whole week off, not just the official two days that the rest of the state receives.

On MEA Monday, we spent a few hours at Urban Air Adventure Park. Part of the reason we went was to celebrate my son's second birthday, but I think the older two kids and my wife got more out of it. It's a pretty cool place, but I'm not convinced that the experience isn't overpriced. We finished the night with a little gift opening and cake for the toddler. He had a hard time blowing the candle out, so he did it with his finger. Thankfully, he didn't burn himself. His finger already had frosting and saliva on it.

On MEA Tuesday, we took a long drive to Afton Apple Orchard. The last time we went there was September of 2013, and we decided this year was a good time to go back. Over the past three years, we've tried other orchards and "autumn activity farms" and have found that they don't all offer us the ability to do certain things, because we go during the week. I'm sure we'll revisit some of those we have visited in the past again in the future and even try out some different ones. This year, the decision was made to pick apples and do other fun things that Afton provides. Unplanned, we also left with three pumpkins. 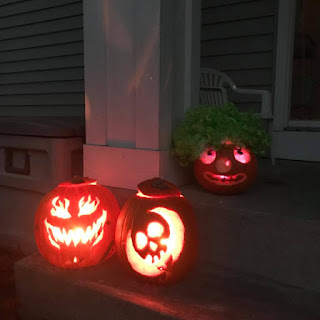 It should be noted that my wife and I were once again reminded to not go anywhere with the kids on a Tuesday. This particular day of the week seems to be the day that schools and other organizations filled with kids seem to choose en masse to go on field trips. We have seen this so much that we have given it a title, Field Trip Tuesday.

On MEA Wednesday, we had school conferences with my oldest two kids' teachers in the morning. That night, we had a friend of mine over that I don't get to see too often. We had a fire in the backyard and my friend and I tried to catch up as the kids went wild. Fortunately, he seems to like them.

On MEA Thursday and Friday, we didn't do anything extra. I had to work Friday, and Thursday consisted of to-dos, mostly. In my absence on Friday, the rest of the family made some awesome pumpkin carvings. 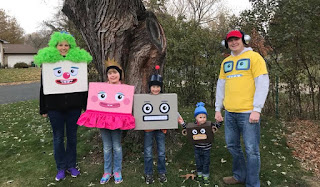 This year, our Halloween costumes were inspired by the show, Big Block Singsong. Every year, my wife crafts/sews our costumes, and this often requires months of preparation and execution. My wife shared a picture with Big Block Singsong and co-creator Adam Goddard, and this, in turn, caused them to share it in their social media. Long story short, the posts have received many likes and shares and positive comments. It was pretty cool to watch it unfold.


Shine That Spotlight, You Crazy Diamond

Focus your attention on Brian Gallagher. I only know Brian through the internet, in part because he lives in California, but also because I know of him through my wife; they went to college together. Brian writes reviews and does interviews for Movie Web and TV Web. Brian also writes TV and movie scripts, because he has ideas and stories of his own.

Read a recent review he wrote on Thor: Ragnarok.

In a round-about way, I've been learning a little more about the philosophy of stoicism. I kind of just stumbled into it, actually, and I find it interesting.

I was doing some work in my garage about a month or more ago, and rather than put on the radio, I decided to plug my phone into the stereo unit, and "listen" to a YouTube video that I had saved in my "watch later" list. That video is actually the one below, within this section. I was connected to my house Wi-Fi, so there were no worries about data being used. (I won't get into that. Yes, I technically have unlimited data.)

The man giving the TED Talk is Tim Ferriss, and a big part of what he spoke of in this video, unbeknownst to me ahead of time, was stoicism. I found the talk interesting and having points that I can apply to my own life. From there on, I let YouTube decide the video. Considering YouTube then played related videos, I continued to learn more about stoicism and other people's takes upon the subject.

I don't know how many minutes I listened, but I do know I spent at least a few hours in the garage. Will I seek out more information on stoicism going forward? I don't know, but it was nice being exposed to something new, while I was doing something else.

If you're interested, give the video a watch. It's a TED Talk by Tim entitled, "Why You Should Define Your Fears Instead of Your Goals." Email getters, get it.