The R&D Workshop No.7

A Renewed Sense Of Purpose?

In a larger, macro sense, I DO understand what I'm trying to accomplish with The R&D Workshop, but in a smaller, micro sense, it's been tough for me to find a groove that seems fitting to me. When I say “smaller, micro sense,” I essentially mean the content that makes up each Workshop update. I like the overarching concept, which is basically updates on my works of passion and their related business, but it has felt like I've been missing something that I could never really wrap my mind around. Everything is a work in progress—some more than others. I do like the progress I've made from No.1 to No.6, however.

One thing that has inspired me lately to take another look at how I approach The R&D Workshop is the concept of weeknotes. For those of you more hip to the vibrations flowing through the internet, this is not a new concept as I have read that this idea, or way of blogging, has been around since 2009. Many bloggers/newsletter writers have been essentially doing this for years in one form or another. My own posts exhibit these tendencies. Heck, what I've written so far in this post is in that vein.

Weeknotes are essentially online diaries or a place to track how the week has gone for your experiments, if you're a scientist, for example. It could also be a newsletter that expresses how your prior week has gone, what you've accomplished, what's ahead, and the cool things you've found along the way. There are many forms that weeknotes can take, but they are very much different than an article or what most blogs have become. If anything, they have a personal quality that those "puppy mill," advertising laden articles can't match. Maybe you can learn something or find an answer with the standard internet fare of today, and they do serve a purpose—unless it's clickbait bullshit—but the concept of weeknotes seems to take blogging back to its roots.

With a weeknotes concept, you actually get to know someone. You can connect more personally to the content, to a person. You may gain insights into your own life, your own works of passion, and the like. That's my take on it, and I've read a handful of posts recently to inform me as much. Maybe I've missed the mark. Maybe I’m an idiot and know nothing. You know nothing, Graham Snow! Here’s the first post I read on it by someone who probably knows more about it than me. The Why of Weeknotes

How will this change The R&D Workshop? I'm not exactly sure. Will this become a weekly endeavor, considering the “weeknotes” inspiration? I'm not exactly sure, but not likely. I still have all of the same responsibilities, and other general time-taking activities that I want and/or need to move forward with. The same stuff that I'm sure most of you readers can relate to. However, it does make me think that more of these updates are likely to come out. Perhaps there will be moments when two posts are published in a week, each from/for a different blog feature. Time will tell. I, for now, cannot. I am sure that I’m getting ahead of myself. I’m a real pro at that. Big dreams require big plans and more hard work than I have been able to conjure the time for. 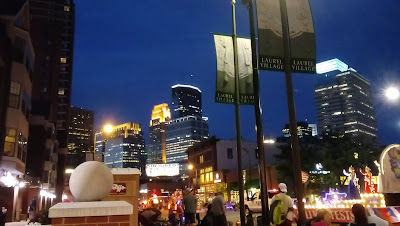 Downtown Minneapolis after the Torchlight 5k I ran in, during the parade. (2018)

Keeping in spirit with this renewed approach, let's get into what's going on with the blog.

July has been a crap month for writing and publishing, not for all bad reasons, though. My parents recently visited for a week. I've gotten some extra work around the house done. Overtime at the-place-that-pays-me has kept the money flowing in the right direction. There are more reasons, but that's what's coming out without too much mental force. Those are the big things. I suppose it's good to take breaks from things, but I wasn't in a place where I felt like I needed a break. I feel like I have a TON of things inside of me to write. It doesn't mean that any of it is good, but it still wants to come out, regardless.

One of the things that I've been chewing on mega-recently has been this new approach to the Workshop. So, it's been nice to get THAT out of my head. Another THE NOT SO DAILY DUMP is just a matter of sitting down and pulling words from experiences, inspirations, or just the general things that I want to share with people. I have plenty of partially written “long form” posts that I could work on, but I also have one in particular that I really want to put my time into and birth to the world. It's a piece on the release of a friend's EP. Don't worry, buddy, I'm still working on it!

Over the last few weeks, I've also asked my friends on Facebook for feedback to some questions I have been mulling over. I didn't get a lot of feedback, but what I did get was very valuable. It was very much appreciated. In those regards, I will be likely making some small changes. The changes are as follows:

1) I will be creating a Facebook page for my blog. The tricky part is that I want to give my blog a name first, but not another abstract name like I would for a music project. I want it to be straight to the point. I have plenty of ideas, I just can’t decide on one name to go with. It’s technically called blog.grahamsedam.com right now… Perhaps I stick with that? I really have two criteria: 1) It has to be obvious that it’s a blog and 2) my name has to be in it.

2) I had someone email me and ask if they could write a guest article on my blog. After an email or two back and forth, I decided that this is not the route I want to take right now. I am BIG into sharing with my readers how awesome other people are, but I also think that the posts on my blog should be from me. It just doesn't feel right to do it otherwise. However, this doesn't mean that I won't include bits of writing, pictures, whatever, as time goes on. Completely two different approaches, they are. I don't really want to muddy things and make it more complicated than it already is. I realize that this is not a change, but an affirmation or declaration going forward.

3) I want to try out the idea of letting people know how long it takes to read a post. I'm not sure if there's an official word-per-minute standard, but it also wouldn't surprise me in the least. I've thought about reading at a reasonably slow pace and then rounding up. This may go bye-bye if it scares people away. I have no clue when this will start.

4) I've decided that I will no longer include "Updates:" in past Workshop posts. These posts are meant to be in-the-moment snippets of what's going on. If you care enough to know how something progresses, read on to the next post. Pretty simple. HOWEVER, I will continue to refurbish old posts as I go along, in the order as I published them.

I suppose those aren't a lot of changes, but they go beyond the standard hub-bub, or something. No matter what one does, there's a bit of administrative work that comes with it. Generally, that gets hired out when one can afford it. I am not one who can afford it, so here I am, administering. 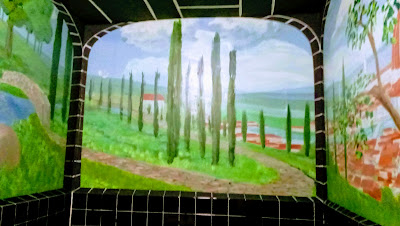 The men's bathroom at Fat Lorenzo's in Minneapolis. (2018)

I have plenty more to say, but I want to make sure that I'm going about it in a fashion that is conducive to the bigger picture. Confused? Me too, often enough. I'm probably selling myself short. There's more to come in the future. I just don't want to get the wires too tangled. More confused? Let's just leave it there.

Until next time, friends.