The R&D Workshop No.8

Here we are again, taking another stab at a new approach to this part of my blog called The R&D Workshop. As I stated in the last update, No.7, I don't plan on doing this weekly, though it would be nice to do so. I have plenty that I want to write beyond these Workshop updates, and sometimes time and consequence determine what we humans work on. That's not always bad, as there ARE other interests of mine. Plus, having a young family creates its own balance of rewards and challenges. Make lemonade with tomatoes, I say. This post focuses on some upgrades, improvements, and whatnot related to my writing and beyond.

First! I started a Facebook page dedicated to my writing. You can find me at Facebook.com/Graham.Sedam.Writes—come join me!

Second! Yes, I did change up this place a little. The new site is "responsive," much more mobile friendly, and I think it looks so fetch. Plus, it's nice to change things up. 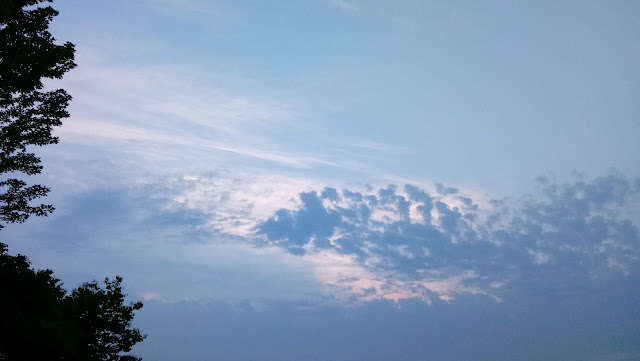 Here's a picture I took on a recent, early morning at the-place-that-pays-me-to-show-up. I thought it was picture worthy. I loves it with my heart. (2018)

A few weeks ago, we purchased and assembled a sit/stand desk from Ikea. Circa 2016, even before I started being a Fitbit-er this past May, I was growing tired of all of the sitting I was doing. I was starting to see the world as a place that was slowly designing lifestyles in a way that would make legs no longer necessary—evolution would take over from there. I could be exaggerating, but I don't think I'm completely off the mark. I decided to start taking more opportunities to stand and would do so unless I needed to sit. My resolve only grew stronger when I got a hand-me-down Fitbit from my wife in May. Rather than just stand, I step. It's even more healthy.

My wife and I started computing at the kitchen counter. It's a two level counter that allows for stools. The higher portion works great as a stand desk. However, it often gets in the way for its intended, kitchen related use. Throughout each week, our all-in-one computers would move back and forth between the counter and the sit desk. We both couldn't stand and compute, so it would generally end up being me doing so, as I need to use a computer more consistently. I was getting tired of the set up, but it was driving my wife nuts. So, we finally got a sit/stand desk. I'm hoping that it will help us be more productive, and it will help us to continue in our healthier, more active lifestyle.

Side note: We had to go back to Ikea later that night, because they gave us the wrong parts for the legs. Their website was not working correctly and, long story short, they pulled us the wrong part. It was the right kind of leg but with measurements for the smaller desk. Then, as we were leaving the second time, my daughter noticed that they gave us white legs, not black. Remember to double check their work! It made for a very long day.

For a while, how long is incredibly difficult to discern, I've felt a need to be more ‘mobile.’ Phones are awesome for all of the things they can do, and I continue to utilize mine more and more, but there are limitations, and sometimes the task at hand is not suited as well for a phone. I bought an iMac a couple of years ago for that reason. It works great, but still, not quite mobile.

I have recognized that I am heavy with the Google computing. I learned from having several phones and a few computers that the cloud is my friend. I'm sure this will doom mankind someday, but for now, game on. Because I do so much work with Google software in my Google account, I thought that I seemed to be the perfect candidate for a Chromebook. Besides, they are super cheap. I can’t believe how much power I was able to get for two-hundred-and-fifty dollars. Am I showing my age?

So far, I'm liking it, even though I have used it only twice. The first time is when I first got it and plugged it in to charge it fully and then explore. The second time was to work on a post that I finished recently, Draze Force: Analog Meets 8-Bit. That second time, I was at my local library, on the WiFi, punching out the keys. And that's the point, really. As much as I'd love to work at home, it can be very difficult to accomplish much with a large chunk of time. The interruptions and general noise/chaos level, while innocent and not malevolent, are ever present. I refuse to try and hobble along with a phone in this capacity, as I want it to be the device of last resort when it comes to writing, and that is still a reality often enough. Also, I want a laptop for those times when it's convenient to meet with someone for scheming any upcoming top-secret projects. Shhh…

In addition, I bought a backpack that I am currently loving. It's meant for laptops, tablets, chords, adapters, among many other things. It's pimped out with pockets and multiple spaces and more places than I know what to currently do with. I feel like I have a mobile office and that I'm ready to work almost anywhere. It's a good feeling.

So, when it's difficult to work at home, and I get the chance to go somewhere else, my biggest question is whether to go to the library or a coffee shop. So far, the library wins out, because I don't have to buy anything. 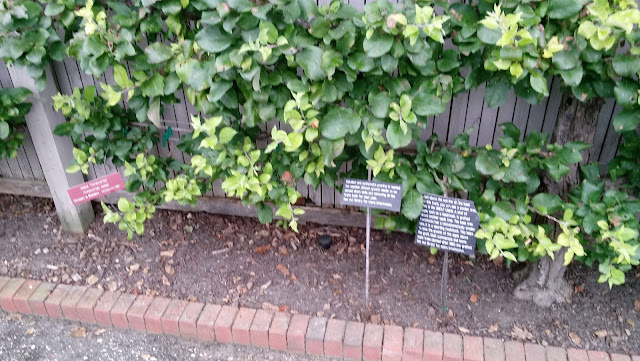 Apparently, apple trees can be grown using the same method as one would with a grape vine. I might have to try this. I apologize for the blurry picture. The photographer has since been sacked. (2018)

Here we are at the end, for now. Perhaps I'll have another edition of THE NOT SO DAILY DUMP or one of my standalone posts completed. I feel like the feature title, “My Thoughts. My Life.,” doesn't fit anymore. When I think about that area of my blog, the words longform and standalone come to mind. Maybe, I'm on to something bigger. I suppose it's nothing important enough to drive me crazy, but it will, slowly—be sure of that. I hope to have many new things to share with you soon.

The R&D Workshop is a recurring feature where I talk candidly about my works of passion and associated things.